Pat was the very first person I showed Broken Man to when I had the idea. I sent him a little voice memo and he replied with "I like it. It's like a graveyard march." This isn't the first time Pat was my "first". ;) He also produced my first single ever, called Elizabeth. Since then Pat and I have played together a lot, AND he has produced, composed, written and performed SO much music. I always tell people that my fave thing is when Pat is working out a part and he is physically in the room, but he "disappears" into his own world for a few minutes, and you can see the genius wheels turning, and you feel lucky to be a part of it, and so you wait. He'll likely be mad at me for calling him a genius, but most everyone he's worked with would agree. Pat's solo at the end of this song is what makes it, I think.

Contact Pat or hear what else he's been up to HERE.

Thank you thank you Pat! 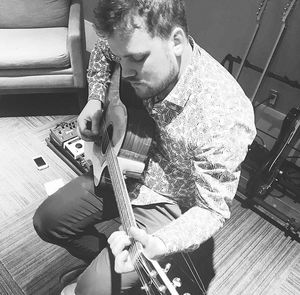