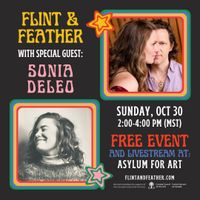 Flint & Feather and Friends is a free-to-attend six-week concert series on Sunday afternoons at Asylum for Art. Join series hosts, Flint & Feather (flintandfeather.com) and a special guest artist each week from 2:00-4:00 PM (MST). FREE to the public, each performance will also be livestreamed online (facebook.com/flintnfeather) and will involve an interactive audience Q&A with the artists.

This week’s feature artist is Sonia Deleo (soniadeleo.com), a folk-soul powerhouse based in Calgary. A jaw-dropping vocalist, Deleo has a rich history in live performance and has co-fronted other acts including The Fig & The Flame. Now a full-fledged songstress in her own right, Sonia is poised to make a well-deserved name for herself with the release of her debut album, Love Notes To The Monsters – a recording that is sure to receive critical acclaim. Witness the power and passion of Deleo’s voice and be swept away by her songs.